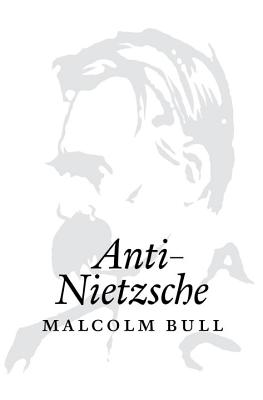 Nietzsche, the philosopher seemingly opposed to everyone, has met with remarkably little opposition himself. He remains what he wanted to be— the limit-philosopher of a modernity that never ends. In this provocative, sometimes disturbing book, Bull argues that merely to reject Nietzsche is not to escape his lure. He seduces by appealing to our desire for victory, our creativity, our humanity. Only by ‘reading like a loser’ and failing to live up to his ideals can we move beyond Nietzsche to a still more radical revaluation of all values—a subhumanism that expands the boundaries of society until we are left with less than nothing in common.

Anti-Nietzsche is a subtle and subversive engagement with Nietzsche and his twentieth-century interpreters—Heidegger, Vattimo, Nancy, and Agamben. Written with economy and clarity, it shows how a politics of failure might change what it means to be human.

Malcolm Bull is a theorist and art historian who teaches at Oxford. His books include "Seeing Things Hidden, The Mirror of the Gods," and "Anti-Nietzsche." He is on the editorial board of "New Left Review" and writes for the "London Review of Books."

"A great thought experiment ... an astonishing call to arms (or to disarm)" — T.J. Clark

“A stimulating and delightful book...Anti-Nietzsche is charming, but Bull’s argument is also subtle and deep”—Times Literary Supplement

“Anti-Nietzsche pursues Nietzsche’s logic but pulls out all the stops.”—The New Inquiry

“The breadth and depth of Bull’s scholarship are ... incredibly impressive.”—Notre Dame Philosophical Reviews

“Bull is an excellent writer of philosophical prose... it is hard to deny the boldness of his thinking, or the seductive force of his writing”—Times Higher Education

“Bull’s book deserves attention both as a scholarly engagement with continental philosophy and political theory, and as a challenging intervention into contemporary left politics.”—Socialism and Democracy