A People Betrayed: The Role of the West in Rwanda's Genocide (Paperback) 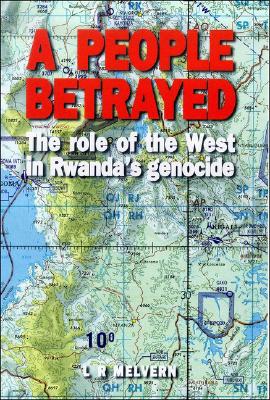 In Rwanda in 1994 one million people were killed in a planned, public and political campaign. For six years Linda Melvern has worked on the story of this horrendous crime, and this book, a classic piece of investigative journalism, is the result. Its new and startling information has the making of an international scandal.

The book contains a full narrative account of how the genocide unfolded and describes its scale, speed and intensity. And the book provides a terrible indictment, not just of the UN Security Council, but even more so of governments and individuals who could have prevented what was happening but chose not to do so.
Drawing on a series of in-depth interviews, the author also tells the story of the unrecognized heroism of those who stayed on during the genocide - volunteer UN peacekeepers, their Force Commander the Canadian Lt.-General Romeo A. Dallaire, and Philippe Gaillard, the head of a delegation of the International Committee of the Red Cross, helped by medical teams from Medecins Sans Frontieres. The international community, which fifty years ago resolved that genocide never happened again, not only failed to prevent it happening in Rwanda, but, as this book shows, international funds intended to help the Rwandan economy actually helped to create the conditions that made the genocide possible. Documents held in Kigali, the Rwandan capital, as well as hitherto unpublished evidence of secret UN Security Council deliberations in New York, reveal a shocking sequence of events. What happened in Rwanda shows that despite the creation of an organisation set up to prevent a repetition of genocide - for the UN is central to this task - it failed to do so, even when the evidence was indisputable. At a time when increasing attention is being given to the need for UN reform, this book provides evidence to urgently accelerate and focus that process. Only by understanding how and why the genocide happened can there be any hope that this new century will break with the dismal record of the last.

“...a wide-ranging account of the actions and inactions of shady arms dealers, inept bureaucrats, and cowardly politicians...” —The Washington Monthly