Biology and Ecology of the Brown and Sea Trout: State of the Art and Research Themes (Paperback) 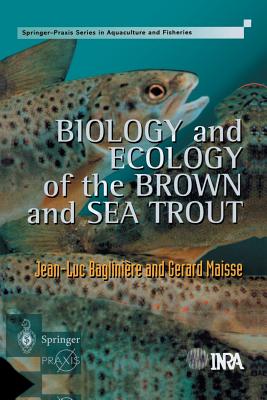 ORDER Salmoniformes j FAMILY Salmomdae SUB-F AMIL Y Coregonidae Salmoninae Thymallinae GENUS Oncorhynchus Salmo Salvelinus SPECIES Salmo trutta Salmo salar Fig. 1. (Legendre, 1980). The three main genera (Salmo, Oncorhynchus, Salvelinus) known to day appeared more recently (at the start of the Pleistocene) from this common ancestry (Jones, 1959). The separation of the American and Euro-Asiatic continents and the subse quent succession of glaciation ages of the Pleistocene and recent eras has not only resulted in the differentiation of these three genera but also the appearances of numerous lower level taxa (Jones, 1959; Hoar, 1976). However, according to Tchernavin (1939), anadromous behaviour appeared at the start of the Ice Age. However, Balon (1980) considers that this behaviour existed before speciation in the Salmonid family and that the marine types, mainly of the genus Salmo would have formed the origin of the freshwater forms. From this well-argued theory of Balon (1980), Thorpe (1982) deduced that the salmonids were in fact primitive teleosts, probably of marine origin, and that certain species may have progressively lost their anadromous behaviour.