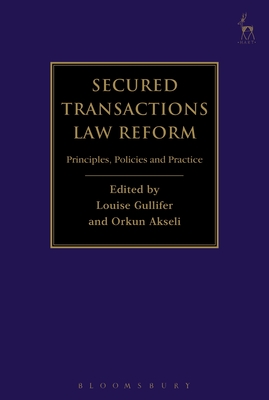 Secured transactions law has been subjected to a close scrutiny over the last two decades. One of the main reasons for this is the importance of availability of credit and the consequent need to reform collateral laws in order to improve access to finance. The ability to give security effectively influences not only the cost of credit but also, in some cases, whether credit will be available at all. This requires rules that are transparent and readily accessible to non-lawyers as well as rules that recognise the needs of small and medium-sized enterprises.This book critically engages with the challenges posed by inefficient secured credit laws. It offers a comparative analysis of the reasons and the needs for a secured transactions law reform, as well as discussion of the steps taken in many common law, civil law and mixed law jurisdictions. The book, written under the auspices of the Secured Transactions Law Reform Project, informs the debate about reform and advances novel arguments written by world renowned experts that will build upon the existing literature, and as such will be of interest to academics, legal practitioners and the judiciary involved in secured transactions law around the world.The text considers reform initiatives that have taken place up to the end of April 2016. It has not been possible to incorporate events since then into the discussion. However, notable developments include the banks decree passed by the Italian Government on 29th June 2016, and the adoption of the Model Law on Secured Transactions by UNCITRAL on 1st July 2016.