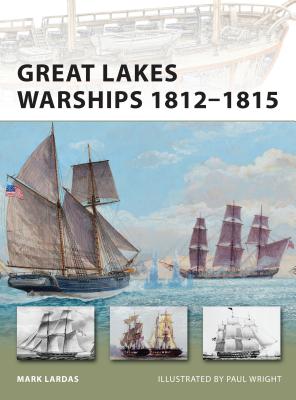 This is book number 188 in the New Vanguard series.

When war broke out in 1812, neither the United States Navy nor the Royal Navy had more than a token force on the Great Lakes. However, once the shooting started, it sparked a ship-building arms race that continued throughout the war. This book examines the design and development of the warships built upon the lakes during the war, emphasizing their differences from their salt-water contemporaries. It then goes onto cover their operational use as they were pitted against each other in a number of clashes on the lakes that often saws ships captured, re-crewed, and thrown back against their pervious owners. Released in 2012 to coincide with the 200th anniversary of the outbreak of the war, this is a timely look at a small, freshwater naval war.

Mark Lardas holds a degree in Naval Architecture and Marine Engineering, but spent his early career at the Johnson Space Center doing Space Shuttle structural analysis, and space navigation. An amateur historian and a long-time ship modeler, Mark Lardas currently lives and works in League City, Texas. He has written extensively about modeling as well as naval, maritime, and military history.

“Another fine volume from maritime historian, writer, modeler and reviewer Mark Lardas. The author covers the design, development and characteristics of these unusual ships in some detail...This well-planned and excellently written volume offers a very valuable reference source for any reader interested in the vessles.” —Ships in Scale magazine