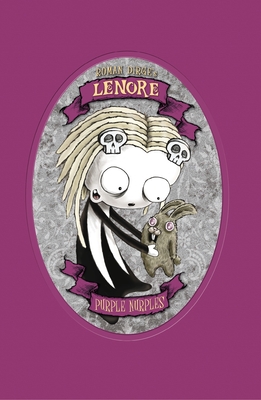 Everyone's favorite cute little dead girl is showcased in all her morbid glory in this new collection of the timeless comic strip from Roman Dirge.

Return once against to the dark, surreal world of Lenore, the girl with a knack for unintentional mayhem and occasional wanton destruction in this fifth volume. Contains Lenore (Vol. 2) #4-7.

Roman Dirge is an artist, magician and creator of the cult-favorite Lenore comic series.

His previous titles include Noogies, Wedgies, Cooties, Taxidermied and the recently published Swirlies.

He is currently working on an animated feature of Lenore, and the ongoing Lenore comic. As well as books, his art and designs have been featured on t-shirts, stationery, toys and tattoos.

“I really liked it. It was dark and humorous, with a fun Halloween feel to it.” “Spooky cute.” – Atomic Moo

“If Tim Burton, Edgar Allan Poe, The Cure’s Robert Smith, and the creative team behind South Park getting together to hash out ideas for a collaborative Seussian “childrens” book sounds like a match made in Heck to you, then this is the comic you’ve been praying for.” – Pop Mythology

“This could be the best of them all.” – Comic Related

“Lenore is an incredibly fun comic and one that continues to entertain. There are several laugh-out-loud moments throughout Purple Nurples that made me look like a crazy person as I was reading this in public. Fortunately, that means I'd fit right in with Lenore and her friends and I'm pretty OK with that.” – Horror Talk


“If you’re looking for a fun and delightfully unusual, light-hearted read then Lenore:
Purple Nurples or any of the other Lenore color deluxe editions by Roman Dirge will certainly satisfy. They’re great comics that’ll sneak up behind you and split your sides open when you least expect it.” – Ravenous Monster
“A very entertaining read.” – Awkward Geeks

“The book is yet another winner — one of indie comics’ most criminally underrated/under-the-radar/unknown series, in my opinion.” “He’s a master of comic timing — not easy to do in a static format — and visually, somehow manages to make many of his panels pop off the page with movement.” – Bookgasm

“I highly recommend this book to any Dirge fan or anyone who happens to like wildly inappropriate humor.” – Lez Get Real


“If you like dark humor and not-so mainstream pop-stories, then Lenore brings it.” –
Retrenders