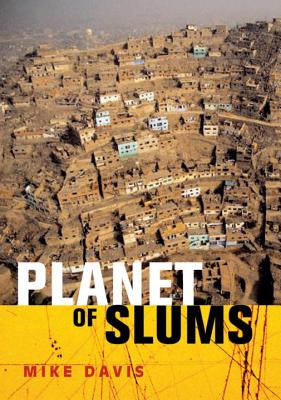 By Mike Davis
Email or call for price.
Not Currently Available Through Reach and Teach

According to the United Nations, more than one billion people now live in the slums of the cities of the South. In this brilliant and ambitious book, Mike Davis explores the future of a radically unequal and explosively unstable urban world.

From the sprawling barricadas of Lima to the garbage hills of Manila, urbanization has been disconnected from industrialization, even economic growth. Davis portrays a vast humanity warehoused in shantytowns and exiled from the formal world economy. He argues that the rise of this informal urban proletariat is a wholly original development unforeseen by either classical Marxism or neoliberal theory.

Are the great slums, as a terrified Victorian middle class once imagined, volcanoes waiting to erupt? Davis provides the first global overview of the diverse religious, ethnic, and political movements competing for the souls of the new urban poor. He surveys Hindu fundamentalism in Bombay, the Islamist resistance in Casablanca and Cairo, street gangs in Cape Town and San Salvador, Pentecostalism in Kinshasa and Rio de Janeiro, and revolutionary populism in Caracas and La Paz.Planet of Slums ends with a provocative meditation on the “war on terrorism” as an incipient world war between the American empire and the new slum poor.

Mike Davis is the author of several books including "Planet of Slums," "City of Quartz," "Ecology of Fear," "Late Victorian Holocausts," and "Magical Urbanism." He was recently awarded a MacArthur Fellowship. He lives in Papa'aloa, Hawaii.

“In this trenchantly argued book, Mike Davis quantifies the nightmarish mass production of slums that marks the contemporary city. With cool indignation, Davis argues that the exponential growth of slums is no accident but the result of a perfect storm of corrupt leadership, institutional failure, and IMF-imposed Structural Adjustment Programs leading to a massive transfer of wealth from poor to rich. Scourge of neo-liberal nostrums, Davis debunks the irresponsible myth of self-help salvation, showing exactly who gets the boot from ‘bootstrap capitalism.’ Like the work of Jacob Riis, Ida Tarbell, and Lincoln Steffans over a century ago, this searing indictment makes the shame of our cities urgently clear.”—Michael Sorkin

“A profound enquiry into an urgent subject ... a brilliant book.”—Arundhati Roy