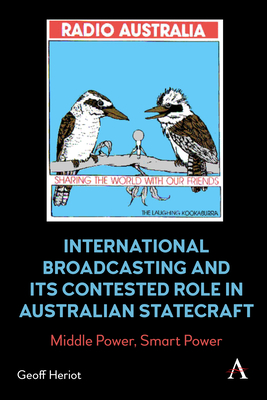 This book re-appraises the concept and utility of state-funded, multi-platform international broadcasting as an instrument of statecraft, which offers cultural representation with the political purpose of contesting relations of power. This at a time when issues of transnational media, the credibility of news and the perils of disinformation and information warfare, figure worryingly in public discourse. The book reflects the perspective of middle power Australia, the circumstances and options of which differ from a great power. It dissects and evaluates the political purpose and efficacy of international broadcasting, its means as an instrument of inter-cultural communication and the variables that enable or impede its effectiveness. The author draws both on extensive scholarly research and his extensive professional experience in journalism, international broadcasting and media management in Australia and internationally.

Heriot proposes a model for the strategic analysis, application, organisational design and operation of multi-platform international broadcasting. Necessarily, the model is informed by an analysis that situates international broadcasting in relation to contemporary theories of soft/hard/smart power projection and inter-cultural communication. He applies the model to the contentious political history and performance of Australia's international broadcaster, Radio Australia, during the late Cold War decades of the twentieth century and asserts the relevance of this approach to an increasingly media-dense - though asymmetric - international environment. The model eschews general or coded descriptions of purpose and identifies six specific functions appropriate to the circumstances and imperatives of Australia as a resident power in the Indo-Pacific region.

The flawed success of Radio Australia during the later years of the Cold War arose from the interaction of a broad range of external and internal variables to which it was exposed. These included geostrategic and national political factors; the formal prerogatives and constraints of the broadcaster's mandate in pursuing defined objectives; institutional relationships across government; Radio Australia's programming or editorial outlook, which determined information agendas and framed the coverage of issues; the production norms and socio-linguistic processes involved with inter-cultural communication; resource constraints and the effect of work design on the character and performance of the broadcaster; and the management of professional and cultural biases (including boundary work demarcations and in-group/out-group rivalry).

Geoff Heriot is a former Australian broadcasting executive and strategist, a foreign correspondent and journalist, with extensive Indo-Pacific regional experience.