Killing Zone: A Life in the PARAs, the RECCEs, the SAS and the RUC (Paperback) 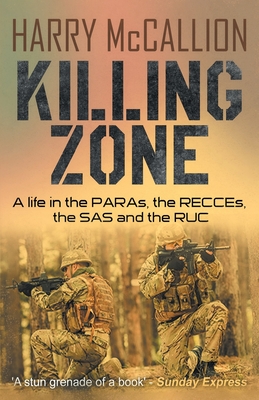 Harry McCallion was a trained killer, fighting in the world's trouble spots with ruthless professionalism.

Born 'a ragged-arsed kid from the backstreets of Glasgow', the son of a violent gangster, McCallion joined the Paras to escape a miserable home life and find the family he longed for.

After six tense tours in Ulster, McCallion gave up everything to move to South Africa in the hope of qualifying for the highly elite, highly dangerous South African Special Forces.

Having succeeded in joining the Recces, McCallion was involved in plots to assassinate Robert Mugabe and Joshua Nkomo.

Back in Britain, McCallion once again put his body and mind through unimaginable pressure during SAS Selection and ended up back in Ulster for two tours with the SAS anti-terrorist team.

But must McCallion must continue his personal feud with the IRA as a policeman in Belfast, before a serious car accident led to him retraining as a lawyer.

Killing Zone is a story of exceptional endurance, told with grim humour and great psychological insight into the minds of those whose lives depend on killing others.

'A stun grenade of a book' - Sunday Express

'McCallion is the hardest man you could encounter' - The Independent

'A remarkable tale of life on the edge' - Glasgow Herald

Harry McCallion served in the British Army in both the Parachute Regiment and in the SAS, as well as spending two years in the South African Special Forces. After six years with the Royal Ulster Constabulary, he retrained as a lawyer and is now a barrister. Harry McCallion is also the author of two novels: Hunter Killer and Double Kill.