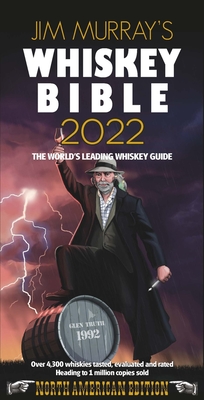 Thanks to industry guru Jim Murray and his internationally acclaimed annual Whiskey Bible, the Japanese are now running out of their own single malt and people have fought in Toronto liquor stores to grab the last bottle of his World Whisky of the Year. Rye, Irish Pot Still, and Bourbon have all seen a massive resurgence in recent years not least thanks to the visionary campaigning of the world's first-ever full time professional whisky writer. Murray has tasted nearly 20,000 different whiskies for the Whiskey Bible since it first hit the shelves in 2003. For this 2022 edition, he reflects on over another 1,200. The 4,700 whiskies included in this 2022 edition range from Scottish Single malts to Australian; from Canadian to Austrian. The whiskies from over 30 different countries are included and evaluated in his forthright, honest, amusing, fiercely independent, and non-pretentious style.

Jim Murray is a legend and leading player on the world’s whisky stage. It is now over 25 years since he became the world’s first-ever full time whisky writer. And this 2021 edition of his Whisky Bible marks the 18th year of annual publication. In his continuous thirst for knowledge and desire to stay at the very top of his subject he has almost certainly visited more distilleries and tasted a higher number of different whiskies than anyone who has ever lived. Jim visited his first distillery in 1975 and after seventeen years of research and discovery made the brave step of going full time. So, in the Spring of 1992, he gave up his position as a journalist for a British national newspaper to create an entirely new branch of journalism; indeed, the descriptive style of tasting notes he created and cultivated in those early days is now widely used throughout the industry. Since then he has sold nearly one million copies of his many books in various languages and in over 30 countries. Of those books sold more than half have been his annual publication Jim Murray’s Whisky Bible, for which he now tastes over 1,000 new whiskies each year. His vast knowledge of whisky has put him in demand as a consultant blender, giving him a unique insight into the subject from both sides of the fence and resulting in awards for both his writing and creations. Uncompromisingly independent, Jim is never afraid to pour scorn on those deserving or to champion whiskies previously unfashionable or unknown. Today the world is enjoying Ardbeg, Pure Irish Pot Still, Canadian and Japanese whisky, such as Yoichi and Yamazaki, because Jim went out on a limb to bring them to the public’s attention. He also, famously, refuses to write for publications where he believes his honesty and integrity may be compromised; for the same reason Jim has also declined offers to become a Keeper of the Quaich. He has, however, been inducted into the Bourbon Hall of Fame. Jim has homes in both the UK and Kentucky. Each drinks sector has its colossus: wine has Robert Parker, beer the late Michael Jackson, and whisky Jim Murray. To countless thousands Jim Murray is the first and last name in whisky. And by keeping this invaluable guide with you at all times, it is the only way you’ll get him in your pocket.