Celtic Mythology: Amazing Myths and Legends of Gods, Heroes and Monsters from the Ancient Irish and Welsh (Paperback) 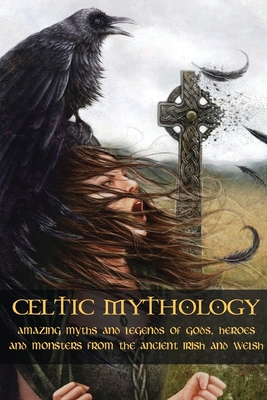 In the early centuries, Celtic mythology survived as a primarily oral tradition, influenced significantly by the geography of its lands. Sagas and legends were passed down from one generation to the next through storytelling; it was only after the Roman conquest that some of these myths were recorded in writing. Even so, this was often done by Christian monks closer to the 11th century, who recorded the stories themselves but stripped away the original beliefs and earlier religious overtones.

The ancient Celts were neither a race nor a nation. They were a varied people bound together by language, customs, and religion rather than by any centralized government.

We are talking about a vast and variegated culture that made its presence felt from the Iberian peninsula (Spain and Portugal) and Ireland to the frontiers of Liguria in Italy and the upper Danube. Suffice it to say, their mythology rather mirrored this multifarious scope, with various tribes, chiefdoms, and even later kingdoms having their own set of folklore and pantheons.

Basically what that means is that 'the Celts' doesn't describe a single cohesive group of people.

However, the Celts were anything but barbarians, and many aspects of their culture and language have survived through the centuries.

The ancient Celts had a vibrant mythology made up of hundreds of tales. Adventure, heroism, romance, and magic are a few of the elements that make Celtic mythology one of the most entrancing mythologies of Europe.

Celtic mythology comes from several regions and different tribes. The bulk of them are from Ireland and also Wales.

Early Irish myths blend mythology and history by describing how Ireland was settled by different groups of Celtic deities and humans. Filled with magic and excitement, the tales tell of battles between forces of light and darkness. They describe a time when gods lived not in the heavens but on earth, using their powers to create civilization in Ireland and to bring fertility to the land.

There are four cycles, or groups, of connected stories. The Mythological Cycle focuses on the activities of the Celtic gods, describing how five races of supernatural beings battled to gain control of Ireland. The chief god was Dagda, whose magic cauldron could bring the dead back to life. The Ulster Cycle recounts the deeds of warriors and heroes, especially Cuchulain, the warrior and champion of Ireland. The Historical Cycle tells of the adventures and battles of legendary Irish kings. The Fenian Cycle deals with the heroic Finn Mac Cumhail, or Finn Mac Cool, leader of a band of bold warriors known as the Fianna. This cycle is filled with exciting adventures and tales of hand-to-hand combat.

Welsh mythology is found in the Mabinogion, a collection of 11 tales. In the Welsh myths, as in those of Ireland, the heroes often are half human and half divine and may have magical powers. Many of the stories in the Mabinogion deal with Arthurian legends, accounts of the deeds of Britain's heroic King Arthur and his knights.