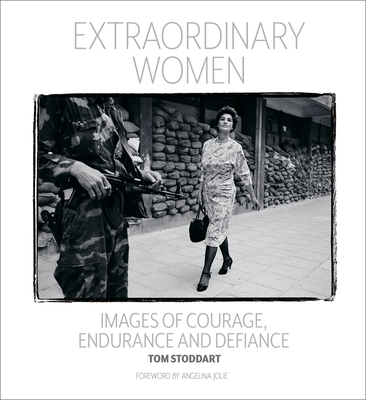 - A photographic collection that salutes the strong will of women through times of war, poverty and hardship- Photographic assignments from The Balkans, The Sudan, Mozambique, South Africa, India, Bangladesh, Lebanon, Iran, Iraq, Afghanistan, Albania, Turkey, China, America, Ireland, and much more- Foreword by Angelina Jolie, introduction by Robin Morgan, Editor in Chief of the Sunday Times Magazine (1991-2009)- The Extraordinary Women images will be screened at Visa pour I'image, the world's biggest international festival of photojournalism at Perpignan, France, in the first week of September. Extraordinary Women will be exhibited at Side Gallery in Newcastle upon Tyne from Saturday 26th September until Sunday 13th December- Includes War on Women, an essay by Marie ColvinTypical warzone coverage has two focuses. The fighters, predominantly young men; and the victims - everyone else. This book calls this familiar narrative into question. Without glamorizing or sanitizing the harsh realities of our world, it presents the endurance and iron will of women in situations of war, poverty and hardship. Throughout his career, award winning photographer Tom Stoddart has shown us the remarkable resilience of all sorts of people from across the world. With Extraordinary Women, he hones his focus on the female perspective. His photojournalistic approach travels through the recent decades, with images displaying courage and freedom, the working lives of everyday women and the frontline of war. Each photo serves as a testament to the agency and strength of those who are so often portrayed as vulnerable and helpless. Tom Stoddart has built a reputation for compelling work, and this collection is especially remarkable for its uncompromising celebration of humanity.

Over the course of his career, Tom Stoddart has captured many momentous fragments of history, from the war in Lebanon to the fall of the Berlin Wall, the election of President Nelson Mandela, the siege of Sarajevo and the Iraq wars. He was granted exclusive access by Tony Blair to photograph the winning Labour election campaign of 1997, and won the POY World Understanding Award for his portrayal of the HIV/AIDS pandemic in sub-Saharan Africa in 2003. He won the Larry Burrow Award for Exceptional War Photography that same year, and his book iWITNESS was deemed the best photography book to be published in the USA. His retrospective exhibition, Perspectives, received 225,000 visitors in 2012. For further information see www.tomstoddart.com