Among the Wolves of Court: The Untold Story of Thomas and George Boleyn (Hardcover) 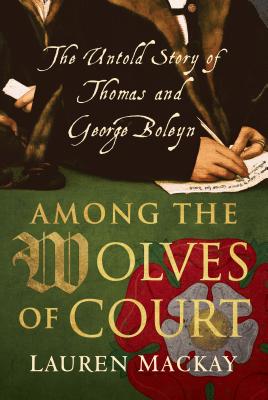 Thomas and George Boleyn - the father and brother of Anne Boleyn and heads of one of the most powerful infamous dynasties in English history. Already key figures in Henry VIII's court, with the ascent of Anne to the throne in 1533 these two men became the most important players on the Tudor stage, with direct access to royalty, and with it, influence. Both were highly skilled ambassadors and courtiers who negotiated their way through the complex and ruthless game of politics with ease. But when the Queen fell from grace just three years later, it was to have a devastating effect on her family - ultimately costing her brother his life. In this ground-breaking book, Lauren Mackay reveals the untold story of Tudor England, bringing into the light two pivotal characters whose part in the rise and swift fall of Anne Boleyn has so far remained cloaked in shadow.

Lauren MacKay is a historian of Tudor England. She is the author of Inside the Tudor Court and a regular contributor to BBC History and All About History. She has lectured at the Tower of London, Hever Castle, Leeds Castle and the National Archives at Kew.