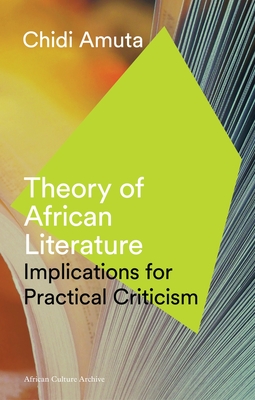 By Chidi Amuta, Biodun Jeyifo (Foreword by)
Email or call for price.

This groundbreaking work was one of the first to challenge the conventional critical assessment of African literature, and, it remains as highly influential on our understanding of African literature as when it was first published. In it, Chidi Amuta argues that African literature is best approached within the wider framework of the dismantling of colonial rule and Western hegemony in Africa. Amuta draws upon both classical Marxist aesthetics and the theories of African culture espoused by Frantz Fanon, Amilcar Cabral, and Ngugi  wa Thiong'o in order to establish a new language of criticism, which he then applies to a diverse array of works by modern African writers such as Chinua Achebe, Ousmane Sembène, Agostinho Neto, and Dennis Brutus.

Amuta’s highly original and innovative approach remains relevant not only as a way to assess the literature of developing countries, but for Marxist and postcolonial theories of literary criticism more generally. Theory of African Literature is a distinguished and lasting contribution to debates around cultural expression in post-colonial Africa.

Chidi Amuta was previously a senior lecturer in literature and communications at the universities of Ife and Port Harcourt. Currently, he is chairman of the editorial board for the Nigerian Daily Times.