Prisoners of the American Dream: Politics and Economy in the History of the US Working Class (Paperback) 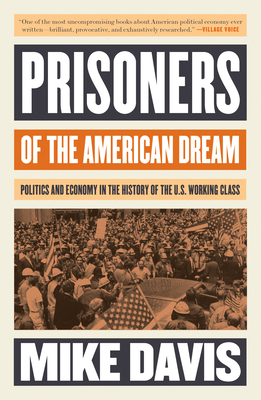 Prisoners of the American Dream is Mike Davis’s brilliant exegesis of a persistent and major analytical problem for Marxist historians and political economists: Why has the world’s most industrially advanced nation never spawned a mass party of the working class? This series of essays surveys the history of the American bourgeois democratic revolution from its Jacksonian beginnings to the rise of the New Right and the re-election of Ronald Reagan, concluding with some bracing thoughts on the prospects for progressive politics in the United States.

“One of the most uncompromising books about American political economy ever written—brilliant, provocative, and exhaustively researched.”
—Village Voice Literary Supplement

“Only a fool can disregard the implications of what he is arguing.”
—Social History

“One of the most trenchant and original analyses of American politics.”
—Socialist Review

“Prisoners of the American Dream established [Davis’s] record of candidly examining the prospects for progressive social change and the dismal fate of organized labor in the United States, with its lack of a party or power.”
—Micah Uetricht, The Nation