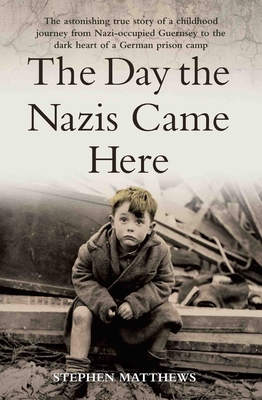 By Stephen Matthews
$14.95
Email or call for price.

By the time he was six, Stephen had been bombarded by the Luftwaffe and deported from occupied Guernsey, along with his family, to a prison camp in the heart of the Third Reich. He had seen men die in front of him, walked with Jews straight off the cattle-trucks from Bergen-Belsen, and had his hand broken by a German guard for attempting to feed Russian prisoners. After three and a half years of imprisonment, they were eventually returned to a Guernsey which had been stricken to the core by Nazi occupation. Told through Steven Matthews’ own extraordinary experiences, as well as writing from his mother’s diaries and previously unpublished photos of historical significance, this is an utterly unique memoir. Depicting the world of Nazi prison camps through the eyes of a child, it tells not just of the prisoners’ desperate plight, but provides a reminder that human kindness may flower in the unlikeliest of places.

Stephen Matthews joined the British Colonial Police in Zambia, then Northern Rhodesia, and received many awards and commendations for his outstanding work in the Belgian Congo in the 1960s. Since then he has run his own international management consultancy company.