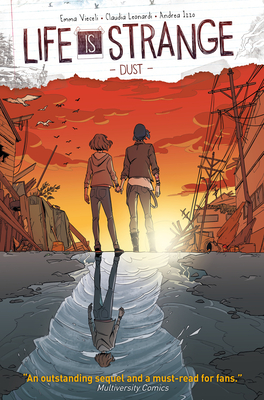 Titan Comics and SQUARE ENIX® are thrilled to announce an all-new graphic novel set in the world of the critically acclaimed, award-winning, highly successful video game series, LIFE IS STRANGE(TM).

Titan Comics' LIFE IS STRANGE(TM) returns readers to the setting of Arcadia Bay, offering fans the opportunity to dive back into the story of its beloved characters.

The first game in the series, LIFE IS STRANGE(TM), follows the story of Max Caulfield, a senior majoring in photography who discovers that she can rewind time when trying to save her best friend Chloe Price. The pair investigate the mysterious disappearance of fellow student Rachel Amber, and uncover a dark side to the life in Arcadia Bay. Meanwhile, Max quickly learns that changing the past can sometimes lead to a devastating future.

Launching episodically in 2015, the game quickly secured incredible acclaim - with over 75 Game of the Year awards, nominations, and industry accolades including the BAFTA award for Best Story, the Peabody Award, the Golden Joystick Performance of the Year, and the Game Awards 'Game for Impact' Award.

An equally well-received prequel game, LIFE IS STRANGE(TM): Before the Storm, launched on August 31, 2017 on PC, XBOX ONE®, the all-in-one games and entertainment system from Microsoft, and PlayStation®4. Developed by DeckNine Games, Before the Storm winds the clock back three years, to chart the nascent relationship between Chloe Price and Rachel Amber.

Emma Vieceli is a comics artist and writer who has worked on a variety of projects by esteemed publishers, including Doctor Who, Back to the Future, Jem and the Holograms, Manga Shakespeare, Girl Comics, and My Little Pony. She has also illustrated popular graphic novel adaptations of Vampire Academy and Alex Rider. Her creator-owned success is Breaks, written with Malín Ryden.

Claudia Leonardi is an up and coming artist based in Italy. Life is Strange is her breakthrough into the world of comic books, with many more projects to come.

"The sequel that we’ve waited years to see ... a great beginning to a new story" - Graphic Policy

"If you like the Life is Strange games, youll definitely love this comic extension to the series!" - Comicosity

"Fans of the game will be absolutely thrilled with “Life Is Strange”...it captures the beautiful spirit of the game." - Multiversity Comics

"A must read for any fan to uncover what happens next." - The GWW

"Vieceli captures Max and Chloe’s voices expertly with plenty of “hella”s to go around. 9.5 out of 10!" - Adventures in Poor Taste!

"The dialogue is so on-point." - The Xbox Hub

"Emma Vieceli does an excellent job capturing the personality of Chloe and Max. A worthy sequel!" - ComicBook.com

"Highly recommended to fans of the games" - Pastrami Nation

"Breathlessly cool ... Bittersweet, with lasting twists and hints of hope, it’s an arc that ultimately wraps up well" - Tech Raptor

"Appropriately encapsulates the tone of characters, friendships and relationships ... [the] presentation is incredible from the front cover onwards" - The Zombie Chimp