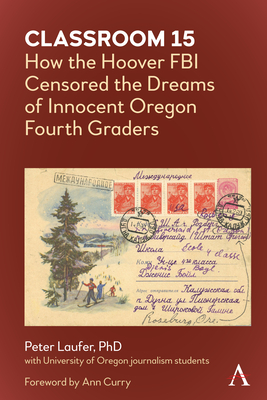 The teacher of Classroom 15, known fondly as Mr. McFetridge, assigned a pen pal project in an effort to take geography lessons outside of the classroom. Imagining a place as far from Oregon as they possibly could, the students wrote letters to nine- and ten-year-old counterparts in the Soviet Union. Janice Boyle, the class secretary, reached out to Oregon's Congressional representative, Charles O. Porter, seeking assistance connecting with peers in Russia. Representative Porter forwarded the letter to the Secretary of State Christian Herter and a week later the students received the shocking and disheartening news that their benign request had been needlessly denied. In the wake of McCarthyism, the Eisenhower administration subverted the assignment, fearing Communist propaganda would infect the innocent minds of eager Oregon schoolchildren.

The students' plight quickly gained national attention with stories running from the Roseburg News-Review to the New York Times. The publicity didn't miss the attention of J. Edgar Hoover's FBI. His agents investigated. They traveled to Roseburg, collected evidence, and took it back to the Bureau's regional headquarters in Portland. The public reaction was swift and unrelenting. The teacher and the Congressman were attacked by outraged Roseburg citizens, the school board, and enraged Americans across the country.

Despite the U.S. government's best efforts, the news reached Russia and the front pages of Pravda. School children from the Soviet Union flooded Douglas County with letters to their Roseburg counterparts, most (but not those found by the authors) were confiscated by authorities. As quickly as the Riverside pen pal initiative materialized, it was quashed.

Born out of a University of Oregon investigative reporting class exercise based on an erroneous New York Times "On This Day in History" column, journalism student curiosity evolved into passion. In the same vein as the fourth-grade class from 58 years before, the voracious class of reporting students doggedly pursued the untold story: An FBI inquiry, a 68-year-old Janice Boyle living in a Las Vegas suburb, a file of letters in Cyrillic script stashed in a cedar chest tucked away in Sisters, Oregon - all leading to a reminder of government repression in the 1960s that resonates in contemporary international affairs.

The book is a remarkable example of experiential learning techniques and successes. The work is a prime tool to teach by specific example the pragmatic processes of student-conceptualized research, employment of the FOIA, and shoe-leather journalism. The book takes an unexpected and deep look at the Red Scare and censorship, societal and state censorship that is reflected in public discourse today.

Classroom 15 is a page-turning adventure story told with the voices of the empowered, tenacious University of Oregon journalism students who took the nascent story and demonstrated their unwavering devotion to the journalistic process by telling the tale.

Peter Laufer, PhD, holds the inaugural James Wallace Chair in Journalism at the University of Oregon School of Journalism and Communication where he was awarded the Marshall Prize for teaching innovation. A former and longtime global correspondent for NBC News, Laufer reports on borders, identities and migration. He has covered the requisite wars and earthquakes, coups and elections.