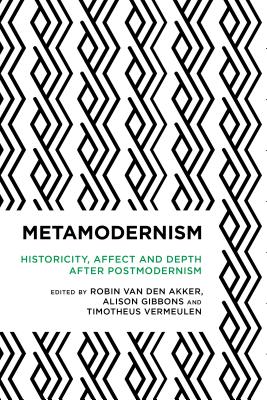 Metamodernism: Historicity, Affect, Depth brings together many of the most influential voices in the scholarly and critical debate about post-postmodernism and twenty-first century aesthetics, arts and culture. By relating cutting-edge analyses of contemporary literature, the visual arts and film and television to recent social, technological and economic developments, the volume provides both a map and an itinerary of today's metamodern cultural landscape. As its organising principle, the book takes Fredric Jameson's canonical arguments about the waning of historicity, affect and depth in the postmodern culture of western capitalist societies in the twentieth century, and re-evaluates and reconceptualises these notions in a twenty-first century context. In doing so, it shows that the contemporary moment should be regarded as a transitional period from the postmodern and into the metamodern cultural moment.

Robin van den Akker is Lecturer in Continental Philosophy and Cultural Studies at Erasmus University College Rotterdam. Alison Gibbons is Reader in Contemporary Stylistics at Sheffield Hallam University. Timotheus Vermeulen is Associate Professor in Media, Culture and Society at the University of Oslo.