The War in the Air: Volume 6-The Allied Air Forces in 1918 Including the Bombing Campaign and Operations in Palestine, Mesopotamia, Persia (Paperback) 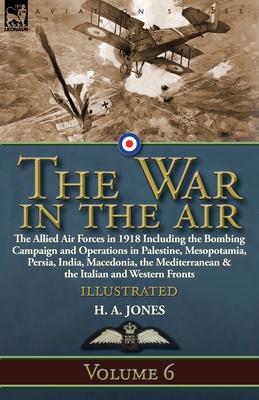 The sixth volume of this excellent and comprehensive history of the war in the air during the First World War concerns the closing years of the great conflict and the final campaigns that led to the armistice. Allied air forces became more sophisticated as they quickly evolved driven by the imperatives of the ongoing struggle. The embryonic dedicated 'bomber command' was created, the airmen of the United States of America joined the battle and, in 1918, the Royal Flying Corps became the independent Royal Air Force. The air war continued to be fought ever more fiercely on the Western Front over Amiens and Bapaume as the protagonists understood that war in and from the air had forever become an essential component to secure victory. This volume also covers the war fought in the 'sideshow theatres' including Palestine, Mesopotamia, India, Persia. Macedonia and over the Italian Front. Naval air operations over the Mediterranean and elsewhere are also eruditely described.

Leonaur editions are newly typeset and are not facsimiles; each title is available in softcover and hardback with dustjacket.