Women and Nationhood in Restoration Spain 1874-1931: The State as Family (Studies in Hispanic and Lusophone Cultures #34) (Paperback) 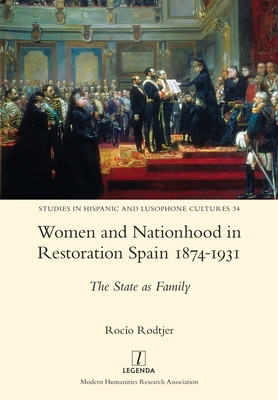 The narrative of civilization has always been told as a family story, from the patriarchal begetting of Genesis to the modern nationalist sagas of the founding fathers. It is a story in which men build the nation and women embody it. This enduring image of the nation as a nurturing mother grants women moral authority, yet reduces them to a procreational role.

Although often overshadowed by the Second Republic, the Spanish Restoration (1874-1931) is a foundational period for modern family narratives: it was a period in which women contributed to, but also transgressed, the trope of the mater patria and helped shape our collective imagination. The family sagas of such ideologically-disparate authors as Julia de Asensi y Laiglesia (1859-1921), Blanca de los R os Nostench (1859-1956) and Carmen de Burgos y Segu (1867-1932) reveal a common disenfranchisement of women, but also a will for them to occupy a more central role in the stories we still tell today.