The Return of Ulysses: A Cultural History of Homer's Odyssey (Paperback) 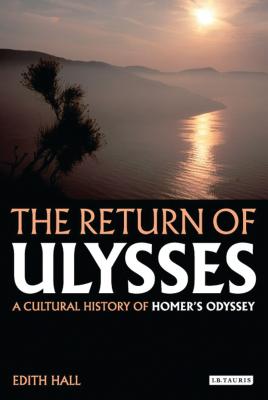 By Edith Hall
Email or call for price.

Whether they focus on the bewitching song of the Sirens, his cunning escape from the cave of the terrifying one-eyed Cyclops, or the vengeful slaying of the suitors of his beautiful wife Penelope, the stirring adventures of Ulysses/Odysseus are amongst the most durable in human culture. The picaresque return of the wandering pirate-king is one of the most popular texts of all time, crossing East-West divides and inspiring poets and fimmakers wordwide. But why, over three thousand years, has the Odyssey's appeal proved so remarkably resilient and longlasting? Edith Hall explains the enduring fascination of Homer's epic in terms of its extraordinary susceptibility to adaptation. Not only has the story reflected a myriad of different agendas, but - from the tragedies of classical Athens to modern detective fiction, film, travelogue and opera - it has seemed perhaps uniquely fertile in generating new artistic forms. Cultural texts as diverse as Joyce's Ulysses, Suzanne Vega's Calypso, Monteverdi's Il Ritorno d'Ulisse in Patria, the Coen Brothers' O Brother Where Art Thou?,
Daniel Vigne's Le Retour de Martin Guerre and Anthony Minghella's Cold Mountain all show that Odysseus is truly a versatile hero. His travels across the wine-dark Aegean are journeys not just into the mind of one of the most brilliantly creative of all the ancient Greek writers. They are as much a voyage beyond the limits of a narrative which can plausibly lay claim to being the quintessential global phenomenon.

Edith Hall is Professor of Classics at King's College London. She is the author, co-author and editor of many books in the field - including the Penguin Classics' translation of Sophocles' Antigone, Oedipus the King and Electra - and regularly contributes to TV, radio and professional theatre.

"The Return of Ulysses represents a major contribution to how we assess the continuing influence of Homer in modern culture." – Simon Goldhill, Professor of Greek Literature and Culture, University of Cambridge"Hall's rich appraisal will be greeted as the definitive investigation of a fascinating and many-sided phenomenon." – Marilyn B Skinner, Professor of Classics, University of Arizona"A brilliant, cultured and far-reaching tool for interpreting the Odyssey, The Return of Ulysses will both teach and delight." – Richard F Thomas, Professor of Greek and Latin, Harvard University

"[Hall] fills her pages with sharp and often surprising observations about the Odyssey and its spiritual children. She devotes much attention to film (The Searchers, The Natural, Cold Mountain and many others), but even reflected in this modern medium, she realizes, the Odyssey owes a measure of its allure to its sheer, echoing antiquity. Reading her good-humored and accessible book is like conversing across the ages." – New York Times Book Review 2010