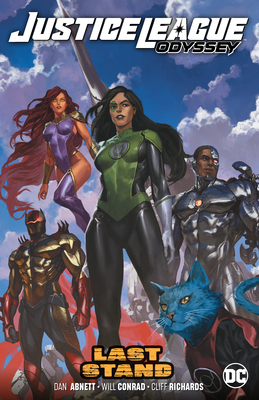 The Justice League Odyssey team makes its final stand against one of the biggest threats in the Mutlvierse—Darkseid.

After fully regaining all of his immense power and corrupting former Justice League members such as Cyborg and Starfire, the dark lord of Apokolips makes an all-out assault on the remaining heroes. To prevent him from returning the planet he rules to reality. Green Lantern Jessica Cruz, New God Orion, and Red Lantern Dex-Starr recruit a new team of oddballs, including a time-traveler with the power to save or destroy all of existence.

With an expolsive ending that leads into Starfire and Cyborg's Dark Nights: Death Metal appearance, this outer space adventure sets new courses for all the characters involved.

Dan Abnett lives and works in Maidstone, Kent. After graduating from Oxford, he worked for a while as an editor of comics and children's books before turning to writing full-time. In the dozen or so years since then, he has written for such a diverse range of characters--including Scooby-Doo, Thunderbirds, Conan the Barbarian, the X-Men, Johnny Bravo, Batman, Rupert the Bear, Doctor Who, Mr. Men, the Terminator and Postman Pat--that he is now clinically bewildered. He created the popular series Sinister Dexter, which he continues to write, along with other strips, for 2000 AD, and is currently writing Aquaman and Titans for DC Comics as part of DC Universe Rebirth.