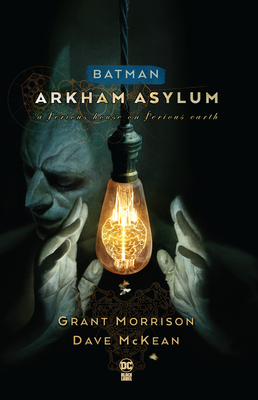 Grant Morrison and Dave McKean's timeless, genre-bending tale BATMAN: ARKHAM ASYLUM is brought back to its classic beauty in this New Edition!

Batman faces his most dangerous foes and his inner demons in order to retake Arkham Asylum from the grips of The Joker, Poison Ivy, Two-Face and many more.

Writer Grant Morrison is known for his innovative work on comics from the graphic novel Arkham Asylum to acclaimed runs on Animal Man and Doom Patrol, as well as his subversive creator-owned titles such as The Invisibles, Seaguy, and WE3. Grant has also written best-selling runs on JLA, Seven Soldiers of Victory, and New X-Men, and helped to reinvent the DC Universe in The Multiversity, All Star Superman, 52, Batman, Batman & Robin and Batman, Inc.

Dave McKean has illustrated several award-winning comics, including the best-selling Batman: Arkham Asylum (written by Grant Morrison), Mr. Punch, Signal to Noise, Violent Cases (all written by Neil Gaiman), and his own Cages. His collected short stories Pictures That [Tick] won the Victoria & Albert Museum Book of the Year Award, and his short film N[eon] won overall first prize at the Clermont-Ferrand Film Festival. McKean has illustrated, photographed, and designed hundreds of CD covers, comic covers, and book covers, including the entire Sandman series. He has worked on print and film projects with John Cale, Stephen King, the Rolling Stones, Lars Von Trier and SF Said, and created ad campaigns for Kodak, Nike, BMW Mini and Smirnoff, among others. He also directed the Jim Henson Productions film MirrorMask, which he co-wrote with Neil Gaiman. McKean lives in England's Kent countryside.