Flat Out in Pieces: Crippled by Concussion - An Athlete's Journey Back (Paperback) 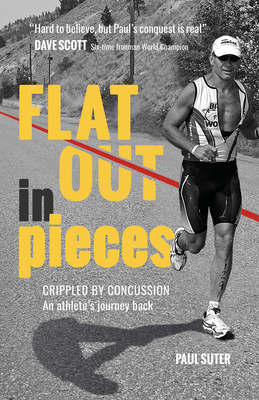 Paul Suter was an elite endurance athlete who went from competing in Ironman triathlons to being unable to take his dog for a five-minute walk. Despite suffering a serious concussion, he continued to train and compete until his exhausted adrenal system collapsed. Paul knew his body wasn't working, but couldn't convince the medical community that his illness actually existed. The ongoing search for a cure contributed to his depression and suffering -- how could he continue to hope, when what he had didn't fit into any doctor's shoe box of remedies?

Paul's relationship with his wife and training partner, Christine, was based on their mutual love of endurance sport. Over seven years, his illness and invisible disability threatened to destroy the bond that held them together. Paul's search for recognition of his condition and for an effective treatment was a quest to restore not just himself but his marriage and their future.

Paul Suter lives in Whistler, BC, where he continues to recover with the help of his wife, Christine. Flat Out in Pieces is his first book.