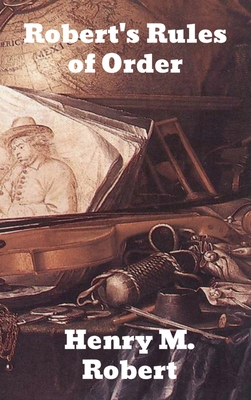 Robert's Rules of Order Newly Revised, commonly referred to as Robert's Rules of Order (or simply Robert's Rules), is a "Pocket Manual of Rules of Order for Deliberative Assemblies" and the most widely used manual of parliamentary procedure in the United States. It governs the meetings of a diverse range of organizations--including church groups, county commissions, homeowners associations, nonprofit associations, professional societies, school boards, and trade unions--that have adopted it as their parliamentary authority. The manual was first published in 1876 by U.S.

Army officer Henry Martyn Robert, who adapted the rules and practice of Congress to the needs of non-legislative societies. Ten subsequent editions have been published, including major revisions in 1915 and 1970. The copyright to Robert's Rules of Order Newly Revised is owned by the Robert's Rules Association, which selects by contract an authorship team to continue the task of revising and updating the book. The 11th and current edition was published in 2011.

The procedures prescribed by the book were loosely modeled after those used in the United States House of Representatives, with such adaptations as Robert saw fit for use in ordinary societies. Although he was in the military, the rules in his book were not based on military rules. The author's interest in parliamentary procedure began in 1863 when he was chosen to preside over a church meeting and, although he accepted the task, he felt that he did not have the necessary knowledge of proper procedure. In his later work as an active member of several organizations, Robert discovered that members from different areas of the country had very different views regarding what the proper parliamentary rules were, and these conflicting views hampered the organizations in their work. He eventually became convinced of the need for a new manual on the subject, one which would enable many organizations to adopt the same set of rules Henry M. Robert himself published four editions of the manual before his death in 1923, the last being the thoroughly revised and expanded Fourth Edition published as Robert's Rules of Order Revised in May 1915.