Mégantic: A Deadly Mix of Oil, Rail, and Avarice (Paperback) 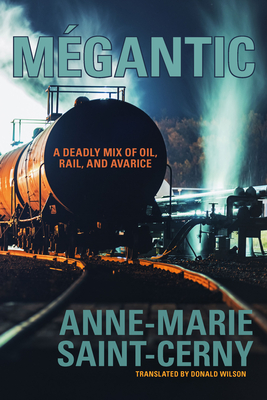 Lac-M gantic, Qu bec, Canada - July 6, 2013. During a hot summer night, a driverless, out-of-control train, firing explosive crude-oil bombs, descends the slope that leads to the scenic town below, pulverizing the downtown area, charring forty-seven trapped victims. The devastation leaves the people dazed ... but is quickly the object of an intentional and tortuous cover-up. Who are the tragedy's real culprits? How did the accident lead to the brutal death of forty-seven people, the suicides of several others, and the devastation of a whole community? Who took control of the crime scene? Who carried out the reconstruction, and for whose good? In this fascinating piece of investigative journalism, written like a thriller, Saint-Cerny reveals the inner workings of the 2013 Lac-M gantic rail disaster. She reveals how the tragedy, far from being just the "error of a faulty system," was knowingly caused by powerful people and institutions distant from the town itself. Iconic in more ways than one, Lac-M gantic is a perfect capitalist tale. Conceived in the offices of Wall Street hedge funders, of Dakota black-gold cowboy magnates, of oil conglomerates, and set up by a political class entirely devoted to the interests of the rail industry, the disaster hit a population which, while still in shock, found itself at the mercy of local predators - the perfect illustration of Naomi Klein's shock doctrine. Despite everything, the transport of crude oil and dangerous products today has increased so much that it constitutes the rail industry's main source of profit. But the Government of Canada stubbornly refuses to shed light on the 2013 tragedy and identify its causes. The fruit of five years of work and interviews with nearly a hundred people from various backgrounds, including victims and their relatives, M gantic: A Tragedy in Waiting, tells the story of the disaster in three acts - before, during, and after - in an investigation whose ultimate goal is to prevent the preventable.

Don Wilson was born and educated in Ireland, taking a degree in Modern Languages at Trinity College, Dublin. He has taught at universities in the West Indies, the UK, and at the University of Waterloo, where he has spent most of his career. He has twice been long-listed for the Best Translated Book award in the US and has been a finalist for the France-America translation prize and for the Governor General's Literary Awards.