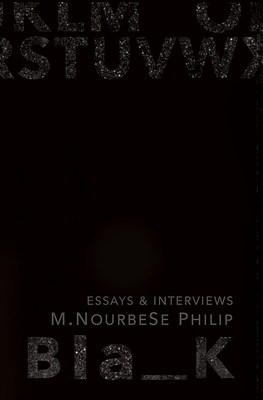 Blank is a collection of previously out-of-print essays and new works by one of Canada's most important writers and thinkers. Through an engagement with her earlier work, M. NourbeSe Philip comes to realize the existence of a repetition in the world: the return of something that, while still present, has become unembedded from the world, disappeared. Her imperative becomes to make us see what has gone unseen by writing memory upon the margin of history, in the shadow of empire and at the frontier of silence. In heretical writings that work to make the disappeared perceptible, Blank explores questions of timeliness, recurrence, ongoingness, art, race, the body politic, and the so-called multicultural nation. Through these considerations, Philip creates a linguistic form that registers the presence of what has seemingly dissolved, a form that also imprints the loss and the silence surrounding those disappearances in its very presence. Praise for Blank: Interviwes and Essays "Poet, Essayist, Novelist, Playwright, Public Intellectual: M. NourbeSe Philip is the principal--and most principled--woman-of-letters in English right now. Her every word is a must-read because she writes nothing that doesn't change everything. She isn't politic; she's political. Unabashedly. Her ruthless truth-telling is page-turning and paradigm-overturning." --George Elliott Clarke, Parliamentary Poet Laureate (2016-17) "To read Blank--new essays as well as selected writings from her 1994 collection Frontiers--is to understand that Philip, in habitual eloquent and poetic prose, was warning us in 1994 about the dystopia of right wing populism, violent racism, and virulent sexism we witness unfolding right here, right now in 2017," --Dr. Richard Douglas-Chin, Associate Professor, Department of English, University of Windsor "In Blank: Interviews and Essays M. NourbeSe Philip shares how the lonely impossibility of black is an articulation of black life. This collection, a gathering of her past and present essays on black diasporic politics, tracks how Philip's poetics emerge from exile--the ungrieveable middle passage and the wreckage of empire enveloping us all, globally. Here we must sit with the inflexible logics of racial capitalism, unfolding in Canada and elsewhere, as these logics are re-languaged by Philip as poetic diasporic struggle. Philip's insights on how race and racism emerge in and beyond Canada, in the form of staged and unstaged misrepresentation, are enmeshed with a politics of (longstanding) refusal that animates the black diaspora." --Katherine McKittrick, Associate Professor, Department of Gender Studies, Queen's University.

M. NourbeSe Philip is a poet, essayist, novelist, playwright, and former lawyer who lives in Toronto. She is a Fellow of the Guggenheim and Rockefeller (Bellagio) Foundations, and the MacDowell Colony. She is the recipient of many awards, including the Casa de las Americas prize (Cuba). Among her best-known works are: She Tries Her Tongue, Her Silence Softly Breaks, Looking for Livingstone: An Odyssey of Silence, and Zong!, a genre-breaking poem that engages with ideas of the law, history, and memory as they relate to the transatlantic slave trade