I Am Nobody: Confronting the Sexually Abusive Coach Who Stole My Life (Hardcover) 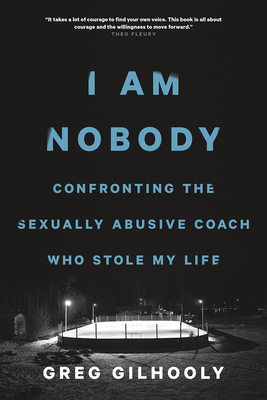 "I Am Nobody is an honest, tragic account of child sexual abuse and a powerful resource for individuals struggling with recovery. Gilhooly clearly highlights the shortcomings of the Canadian justice system's approach; hopefully, one day, the punishment will fit the crime. —Sheldon Kennedy, former NHL player and author of Why I Didn't Say Anything In this raw, unflinching look at how his dream of playing hockey was stolen from him by charismatic hockey coach and sexual predator Graham James, Greg Gilhooly describes in anguishing detail the mental torment he suffered both during and long after the abuse and the terrible reality behind the sanitized term "sexual assault." Although James has been convicted of sexually assaulting some of his victims, including Sheldon Kennedy and Theo Fleury, he neither confessed in court nor was convicted of sexually assaulting many of his other victims, including Gilhooly, depriving him of the judicial closure he craved. Gilhooly also provides a valuable legal perspective--as both a victim and a lawyer--missing from other such memoirs, and he delivers a powerful indictment of a legal system that, he argues, does not adequately deal with serial sexual child abuse or allocate enough resources to the rehabilitation of the victim. Most important, Gilhooly offers hope, affirmation, and inspiration for those who have suffered abuse and for their loved ones.

Greg Gilhooly is a graduate of Princeton University and the University of Toronto, Faculty of Law, and as held senior positions in numerous corporations.