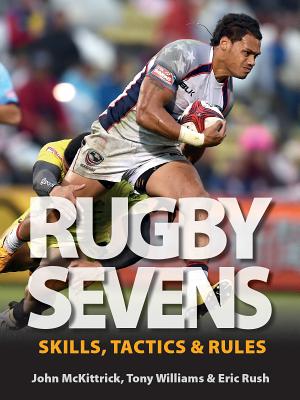 Rugby sevens is a faster and more free-flowing game of rugby than the fifteens. Played with seven per side on the same-sized field as fifteens means fewer defenders with more space to cover and a far faster pace.

Rugby Sevens: Skills, Tactics and Rules describes how to enjoy playing sevens and also how to win. All aspects of the game are covered including choosing a team, coaching and conditioning, set formations and technical elements, team tactics and the role of team captain and much more.

The book includes 100 photographs of international male and female players in action, including team USA. Utah-born Maka Unufe of the USA Rugby Sevens is on the front cover.

The chapters in this book are:

Sevens is an international game followed by legions of fans. Its restoration as an Olympic sport for men and women at Rio 2016 will introduce the exciting sport to millions of new fans and will undoubtedly inspire many new players.

John McKittrick is a highly respected international Rugby Sevens coach. Tony Williams has written 18 rugby books including biographies of All Black legends Sean Fitzpatrick, Zinzan Brooke, Michael Jones, Ian Jones, Frank Bunce and Carlos Spencer; profiles of each of the New Zealand Super Rugby teams; and co-authored four editions of Rugby Skills Tactics and Rules. Eric Rush is a Sevens legend. He represented New Zealand for 17 years and, as captain, led the team to a Gold Medal at the 1998 and 2002 Commonwealth Games, the World Sevens Series Title for six consecutive years, and the Sevens World Cup championship in 2001.