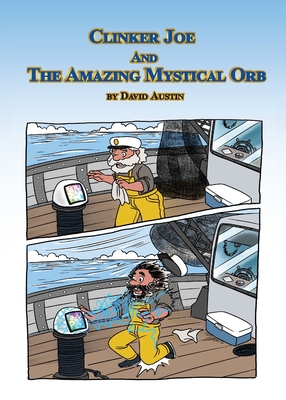 By David Austin
Email or call for price

Simple fisherman Clinker Joe sees his world turned upside down when he drags up the head of a robot while fishing on his boat. After his internal systems are improved beyond imagination by his new robot companion, he's thrust into an intergalactic battle between good and evil.

Clinker Joe is a fisherman who finds a heavy orb in his net, which turns out to be the head of super-advanced intelligent robots. At this stage Joe has no idea that he has dragged up. He takes his gloves off and actually touches it with his bare hands, and then experiences a huge powerful throbbing sensation from the orb's system. The DNA signature of Joe's hand took the robot out of stasis, and it automatically fires out an incredibly powerful healing pulse beam which targeted Clinker Joe. This results is that ALL his internal systems were improved far beyond human capabilities. The orb declares its name is OM1, a member of the Talos, a robot collective, who were created by a clever, warlike species called the Kreel. The Kreel had lost their war, but OM1 does not find out until hundreds of years later when Joe pulls him from the sea. A fearful, galactic enemy called the EXOS emerges to threaten the universe with their demonic mission of destroying the cosmos using dark anti-matter weaponry meant to create an anti-world. Hope looks scarce until five very old entities, called the Ancient Ones, materialise in the form of blinding light to forge an alliance with Joe, the Talos, and the Kreel to stop the EXOS at all costs. Such is the power of the EXOS that the very existence of the cosmos itself is at risk, and it's up to Joe Clinker and his companions to save the world. the universe, and everything that has ever existed.

Dive into the first book of the series and follow Clinker Joe, humankind, robots, aliens, and supreme beings in a science fiction adventure that packs a punch with romance, warfare, and technology like mankind has never seen before