Striking Down the Home: The Propaganda of Family Court and Child Support Mechanisms (Paperback) 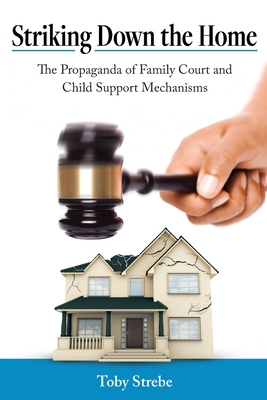 What has become common place today was practically unheard of a century ago-the State's war against the family. Author Toby Strebe exposes the darkest, best-kept secret of the divorce industry. This is an unflinching, uncensored examination of the often harrowing and progressively dehumanizing twists and turns within the divorce and child custody apparatus.

You'll learn that Parens Patriae isn't an inherent power of the State, how child support doesn't support children, how protection orders injure the ones they're intended to protect, and how the divorce mechanisms are weaponized to control the mind-conforming the individual into the image of the State.

Strebe shares his personal divorce experience and the permanent scars caused by government intervention. But his courage to stand against tyranny is an encouragement to all who are trapped in the ruthless machine. He offers practical ways to endure adversity, strategize your divorce case, and peacefully resist an oppressive government.