Getting Back Up: A Story of Resilience, Self-Acceptance and Success (Paperback) 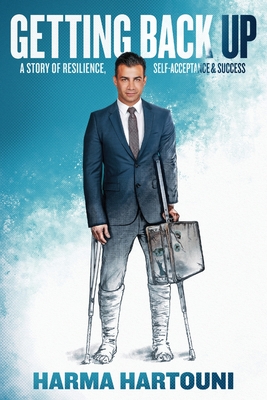 Born in America but raised in Iran, Harma Hartouni was content in building the life his Armenian family and community had planned out for him. Fate disagreed. One day, while driving down a mountainside, Harma had a vision of a man sitting in his passenger seat who told him he was about to die. Moments later, a tragic and fatal accident dramatically shifted the course of his life forever and gave birth to the man he is today. Getting Back Up is Harma's survival story.

When you grow up in Iran, you're expected to stick to the plan. That means marrying a suitable wife, getting a respectable job (doctor is preferred), and building a life in the community you were raised in. Instead, Harma is a proud gay man living in Los Angeles, one of the most successful real estate entrepreneurs in America, and a husband and father of three. His journey from what he thought his life would look like to where he ended up is remarkable. It is a testament to the strength of the human spirit and the power of getting back up with an unwavering resolve to live an authentic life.

Harma has survived abuse, sexual assault, bullying, and the constant fear that his biggest secret, his sexual identity, was not only taboo but a potential death sentence. But what becomes of the human spirit if our goal is merely to survive but not live in truth? If your manufactured happiness were stripped away and you were left with nothing, would you try and recreate it? How do you find the will to not only get back up, but dare to dream for more? These are all questions that Harma seeks to answer by examining his own life.

Getting Back Up is a collection of his most impactful experiences, both before and after the accident. It chronicles his challenges growing up in a dysfunctional and abusive environment, being a gay child in one of the most homophobic societies in the world, and ultimately finding success and happiness with the deck stacked against him.