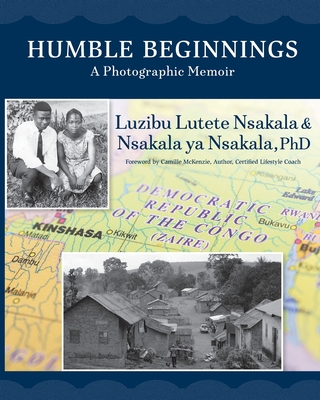 There is no standard formula for achieving success in life Find out how Luzibu and Nsakala achieved theirs-from their humble beginnings.
Through this photographic memoir, Humble Beginnings, Luzibu and Nsakala inform the reader that they were born and grew up in two small villages in the southwestern part of the Democratic Republic of the Congo, then known as the Belgian Congo. These and the surrounding villages were, and still are today, without modern amenities such as electricity, indoor plumbing, running water, and paved roads. However, determination, hard work, support from their families, and more importantly, God's grace enabled them to graduate from church-operated primary and secondary schools. Nsakala would eventually immigrate to the United States in 1965, and Luzibu would follow him in 1966. Difficult language and cultural barriers would not deter them from achieving higher education successes while bringing up their two bundles of joy, a daughter named Munlemvo and a son named Mukiese. Luzibu and Nsakala worked in greater Hartford, Connecticut, at well-known firms before retiring in 2010 to the Sunshine State of Florida, where, by the grace of God, they are enjoying retirement to the fullest. In this memoir, Luzibu and Nsakala show that with hard work, persistence, support from family and friends, and God's blessings, one can achieve a high degree of success irrespective of one's first station in life.