Obama's Deadliest Cover-Up: They All Have Blood on Their Hands (Paperback) 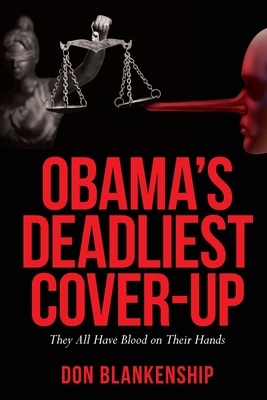 In 2010, a mine explosion killed twenty-nine coal miners in Raleigh County, West Virginia. Obama's Deadliest Cover-up goes beyond the official narrative of the 2010 Upper Big Branch (UBB) Mine disaster to disclose the dark truth. In this daring expos , Don Blankenship reveals how far the government will go to keep its dirty secrets, even if it means disparaging deceased miners and sending innocent Americans to prison.

Using government documents, witness testimony, and science, Blankenship pieces together the Obama-Biden administration's responsibility for the explosion. Blankenship explains how the government used prevarication, lies, and document destruction to bury the truth. Blankenship calls the American media "Pinocchio" and backs it up. Blankenship demonstrates that America's elite, America's media, and America's DOJ hid the UBB truth and says, "They all have blood on their hands."

An unflinching look at corruption in America, Obama's Deadliest Cover-up issues a dire warning: Our government will do anything to "get what it wants."

Don Blankenship was "born into a poor house, dined at the White House, and spent time in the big house." Blankenship grew up in Appalachia, worked as a teenage coal miner, and later became CEO of Massey Energy Company, a then publicly traded Fortune 600 company.

Blankenship was unjustly sent to Taft federal prison for a misdemeanor following an explosion at a Massey Energy Company coal mine in which twenty-nine miners died. Blankenship was the only misdemeanant at Taft where he served ten months with 2,400 felons. Nefarious US District Judge Irene Berger is now denying Blankenship a "certificate of appeal."

In 2018, Blankenship ran for a seat in the US Senate and was leading in the polls before Senator Mitch McConnell and President Trump helped to defeat his campaign. More than one hundred national media outlets falsely broadcast that Blankenship was a felon as the election approached.

Blankenship is recognized by the United Mine Workers of America (UMWA) and the Democratic Party as the person most responsible for their loss of prominence in West Virginia.