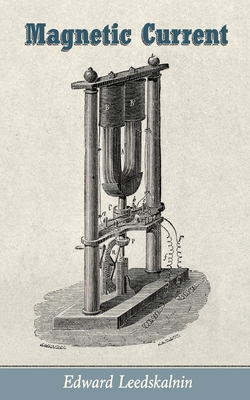 Magnetic Current is a short pamphlet by eccentric sculptor and writer Edward Leedskalnin. Detailing his many experiments with magnets, this work posits that it is not metal itself that is magnetic. Rather, tiny individual magnet particles that circulate in and around the metal give it its pull.

Edward Leedskalnin was born in Latvia in 1887. While his formal education lasted only until 4th grade, he was intensely curious and spent much of his youth reading. At the age of 26, Leedskalnin was engaged to marry a young woman named Agnes Skuvst. But as she was only 16, she (or her mother) decided that he wasn't a suitable match and called off the wedding the day before it was set to occur.

Heartbroken, Leedskalnin emigrated to the United States. He spent several years in the Pacific Northwest, where he contracted tuberculosis. After his recovery, he moved to Florida where he hoped the mild climate would be better for his health. In 1923, he purchased an undeveloped acre of land in Florida City, where he began an ambitious project that would absorb the next 28 years.

It was called Rock Gate, and it would eventually consist of over 1,100 tons of hand-carved oolite stone. Leedskalnin cut massive pieces of the rock from his property, moved them, and sculpted them-all on his own. Rock Gate was both project and home. He built a two-story tower from oolite, which served as his living quarters. In the grounds below, sculptures and carved stone furniture dot the landscape. The project was dedicated to his "Sweet Sixteen," the woman who rejected him years before.

Sometimes referred to as "Florida's Stonehenge" because of the size and scale of the undertaking, no one is entirely certain how the megalith project was completed. But it's especially impressive considering Leedskalnin was only 5 feet tall and weighed barely 100 pounds.

During the years of his construction project, Leedskalnin also conducted experiments and wrote several pamphlets. For two of those years, he studied and tested magnets from his home base of Rock Gate. His findings were eventually compiled into Magnetic Current, a short pamphlet detailing his theories of magnetism.

The pamphlet explains many of his experiments which can be replicated if one wishes. Using U-shaped, round, and bar magnets, as well as car batteries, light bulbs, and coils of wire, he demonstrates the movements of magnetic currents in a double helix pattern, swirling around each other to create pull.

Within the structure of the north/south pole magnet, Leedskalnin found answers to not only simple magnetism, but to greater questions of the universe. "The earth itself is a great big magnet," he states. Individual magnets-not the metal that we think of as a magnet, but the microscopic magnets that circulate the metal-emerge from each pole and run to the other, creating permanent magnetism.

"North and South Pole magnets are not only holding together the earth and moon, but they are turning the earth around on its axis," he writes. In his view, a reversal in the polarity of either the earth or the moon would lead to the moon crashing down to earth.

Edward Leedskalnin died in 1951 of kidney failure-possibly due in part to his diet of crackers and sardines. His life's work can still be explored, both through his writings and by visiting Rock Gate (now called Coral Castle) which is a tourist attraction in Homestead, Florida.