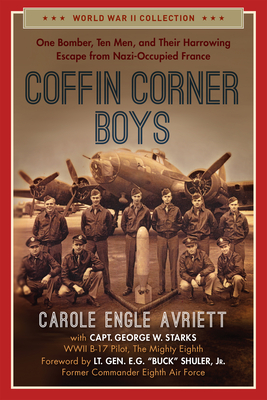 A Story of Adventure, Survival, Loyalty, and Brotherhood

Taking off from England on March 16, 1944, young Lt. George Starks and the nine-man crew of his Flying Fortress were assigned to the “coffin corner,” the most exposed position in the bomber formation headed for Germany. They never got there. Shot down over Nazi-occupied France, the airmen bailed out one by one, scattered across the countryside. Miraculously, all ten survived, but as they discarded their parachutes in the farmland of Champagne, their wartime odyssey was only beginning.

Alone, with a broken foot and a 20mm shell fragment in his thigh, twenty-year-old Starks set out on an incredible 300-mile trek to Switzerland, making his way with the help of ordinary men and women who often put themselves in great danger on his behalf. Six weeks later, on the verge of giving up, Starks found himself in the hands of a heroic member of the French Resistance—he calls him “the bravest man I’ve ever known”—who got him safely across the heavily guarded border.

Similar ordeals awaited the other nine crewmen, who faced injury, betrayal, cap-tivity, hunger, and depression. It was nothing short of miraculous that all ten came home at the end of the war.

George Starks emerged from his ordeal with two passions—to stay in touch with his crew whatever the obstacles and to return to France to find and thank the brave souls to whom he owed his life. His enduring loyalty enabled him to do both.

Growing up in a family steeped in military history, Carole Engle Avriett often heard her uncle—chief mechanic for Gen. Claire Lee Chenault’s Flying Tigers—insist, “Ain’t no fake stories ever gonna outdo the real ones.” Convinced that he was right, Avriett pursued a career as an editor with Southern Living Magazine for nearly fifteen years recording real-life stories, then as an author at the intersection of true-life narratives and military history. Coffin Corner Boys is her sixth book.

Avriett graduated from the Uni. of California, Davis, with a BA of double majors in English and History, specializing in Military History. She received a Masters of Education with a concentration in English Composition from the Auburn Uni. where she taught Advanced Composition while working on doctoral level course-work in Literature.