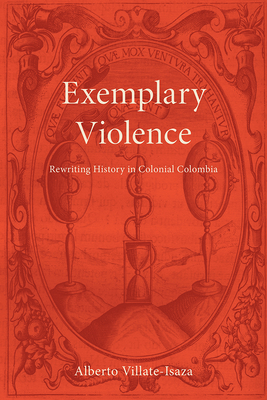 By Alberto Villate-Isaza
Email or call for price.
Special Order

In his seminal essay Discourse on Colonialism, Aimé Césaire asserts that colonization ultimately works to decivilize the colonizer, awakening baser, brutalizing, and dehumanizing instincts. In this crucial new study, Villate-Isaza explores the violent colonial history of the New Kingdom of Granada (modern-day Colombia and Venezuela) by examining three seventeenth-century historical accounts—Pedro Simón’s Noticias historiales, Juan Rodríguez Freile’s El carnero, and Lucas Fernández de Piedrahita’s Historia general—each of which reveals the colonizer’s reliance on the threat of violence to sustain order. Despite their attempts to convey a narrative of European political, technical, and moral superiority, these accounts reveal tensions between the writers’ social interests and personal identifications. As they attempt to reinforce the principal tenets of European civilization and Catholic Reformation orthodoxy, they also reveal contradictions that emerge when colonizers behave in barbaric ways.

ALBERTO VILLATE-ISAZA is an assistant professor of Spanish at the University of Georgia, where he specializes in Latin American colonial literature, culture, and historiography, particularly in the New Kingdom of Granada.

"Exemplary Violence makes an important contribution by putting Juan Rodríguez Freile’s El carnero—long appreciated for its salacious anecdotes of sin in colonial society—in dialogue with lesser-known works by Pedro Simón and Lucas Fernández de Piedrahita. Villate-Isaza offers new insights on their efforts to reinforce European cultural values and ideologies even as they grapple with the evident failures of evangelization and colonial government in New Granada."
— Sarah Beckjord

"Exemplary Violence offers a rigorous and innovative comparative analysis of three key figures in the literary colonial canon in Colombia: Fray Pedro Simón, Juan Rodríguez Freile, and Lucas Fernández de Piedrahita. Using the concept of baroque allegory, this book wisely explores the tension between culture and barbarism that inspired these authors to transform history in their attempt to overcome, in writing, the early crisis of the Spanish colonial discourse."
— Rubén Sánchez-Godoy