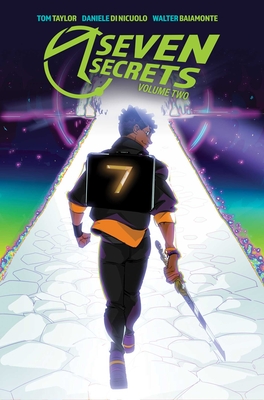 With The Order on the brink of extinction, Casper and the remaining Keepers and Holders are forced into hiding in the land of the Faerie searching for the truth.

THE WORLD HAS CHANGED FOREVER. The Order is on the brink of extinction. Casper and the remaining Keepers and Holders are forced into hiding in the Faerie realm, where he will discover the truth about his own origins, and that it may be more complicated than he realized. With a new leadership comes a new goal for the Order. Now that the first secret has been unleashed, the time for hiding is over. It’s time to take the fight to the seekers. New York Times bestseller Tom Taylor (DCeased) and Daniele Di Nicuolo (Mighty Morphin Power Rangers) continue the new series about seven powerful secrets—words, wonders, weapons, and worse—with the power to change the world. Collects Seven Secrets #7-12.

Tom Taylor is an Australian #1 New York Times bestselling comic book author, playwright and screenwriter. He is best known for his work on the DC Comics series Injustice: Gods Among Us, DCeased and Suicide Squad, Marvel's All-New Wolverine, X-Men Red and Superior Iron Man and his many Star Wars works. He is the co-creator, head writer and Executive Producer of the CG animated series The Deep based on his graphic novel series of the same name.