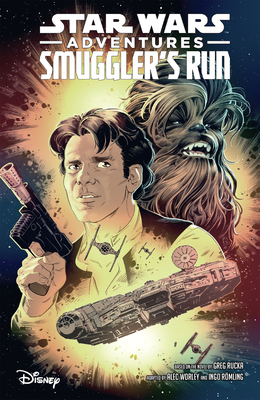 All-star writer Greg Rucka (The Old Guard, Wonder Woman) sets the galaxy's most infamous smugglers on a high-stakes mission that will require all their cunning and courage!

Han Solo and Chewbacca team up for an exciting adventure in this thrilling middle grade graphic novel. Set between Star Wars: A New Hope and Star Wars: The Empire Strikes Back, the story follows everyone's favorite pair of smugglers as they fly the Millennium Falcon on a top-secret mission for the Rebellion. Clues scattered throughout the story also foreshadow events to come in Episode VII, The Force Awakens!

The author of four novels about professional bodyguard Atticus Kodiak--Keeper (nominated for a Shamus Award by the Private Eye Writers of America), Finder, Smoker, and Shooting at Midnight--Greg Rucka has been writing since he was eight years old, and hopefully is improving with age. A longtime comics fan, his first graphic novel series was the suspense thriller Whiteout, published by Oni Press and nominated for three Eisner Awards in 1999. Since that time he has been a contributing writer for DC Comics and an active participant in the Batman series of titles.
Born and raised in California, he earned his undergraduate degree at Vassar College and his MFA at the University of Southern California.

Ingo Römling is an illustrator from Germany whose credits include The Universe Chronicles, Malcolm Max, Survivor Girl, Trollhunters, and multiple projects in the Star Wars universe.