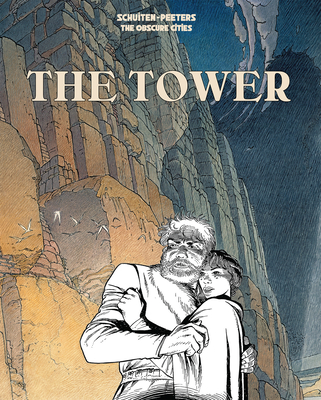 Masterful fantasy comes alive as the fifth release in Alaxis Press' The Obscure Cities series brings the award winning graphic novels to readers in English with an all-new translation!

Giovanni Batista is a third-class maintainer of the Tower. His section is deteriorating more and more by the day and he has not heard from any of his inspectors or fellow maintainers in months. Running out of supplies and having filed multiple written complaints, he decides to descend to the base. Using a chute of his own making, he crash lands and is found by Elias Aureolus Palingenius and the lovely Milena. He finds a world full of books and people he never knew of, but the mystery of why the Tower was built still nags at Giovanni so he and Milena decide to climb to the top to find answers.

The Tower, presented in this new edition, is a fabulous story for the exploration of a deliquescent world, an epic fable to the dimensions of world-building, a fantastic escape full of paradoxes, simulacra, and pretense. Magnificent mastery, invention, and poetry, this is undoubtedly one of the most beautiful jewels of the exciting saga of the OBSCURE CITIES.

Benoît Peeters was born in Paris on August 28, 1956. After publishing two novels early in his career, he experimented with diverse genres: essay, biography, illustrated story, photo novel, film, television, radio theater and of course comics. An Hergé specialist, he has written three books to date on the subject: The World of Hergé, Hergé, Son of Tintin, and Read Tintin. He is also the author of several books on comics, storyboards and biographical studies on Hitchcock, Nadar, Jacques Derrida and Paul Valéry

François Schuiten was born in Brussels on April 26, 1956, into a family of architects. Since 1980, he has worked with Benoît Peeters on The Obscure Cities series. His graphic novels have been translated into a dozen languages and have received numerous international awards. He has also created many illustrations, posters and postage stamps across Europe. In 2002, he received the prestigious lifetime achievement award from the Angouleme festival. He published his first solo effort, The Beauty, in 2012, and designed a train museum, Train World, which opened in Brussels in 2015. His 2014 exhibition and accompanying book, Revoir Paris, has met with international praise.