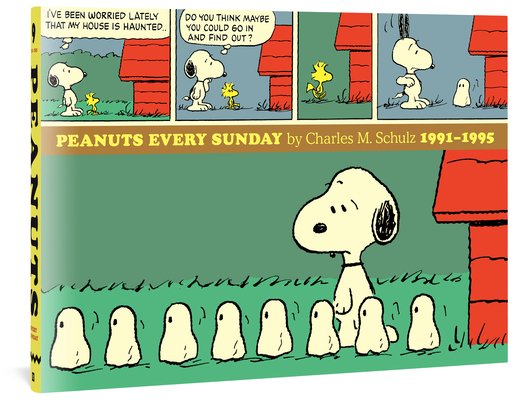 Peanuts has almost always been collected and reprinted in black and white. But many who read the popular comic strip during its original newspaper run remain fond of the striking, pastel-heavy coloring of its Sunday pages, which made for a surprisingly different and fulfilling reading experience. As Peanuts enters the '90s, all the classic characters — Charlie Brown, Linus, Lucy, Sally, Pig-Pen, Peppermint Patty, and Marcie — are all present, as is the brightest star of the strip, Snoopy. This volume highlights the wacky friendship between Snoopy and Woodstock, Charlie Brown's supreme ineptitude on the ball field, and the amusing hijinks of Snoopy's desert-roaming brother, Spike. Collected in this gorgeous, oversized coffee table book, the strips in Peanuts Every Sunday 1991–1995 have been scrupulously restored and re-colored to look better than they ever have — allowing fans and new readers to immerse themselves in Charles M. Schulz's timeless masterpiece.

Peanuts Every Sunday is as fascinating to read as watching an image emerge during a gravestone rubbing. Shadows and portents slowly rise on the paper, hinting at what the final work will look like.…The comics here, large and dipped in warm, spirited colors, reek of childhood Sunday mornings. They're the perfect riffling side dish to blueberry pancakes and bacon.