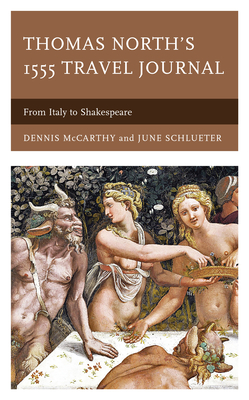 By Dennis McCarthy, June Schlueter
Email or call for price.

Thomas North's 1555 Travel Journal: From Italy to Shakespeare makes available a little known early modern journal kept by a member of Queen Mary's delegation to Rome, its purpose to win papal approval of England's return to Roman Catholicism. The book provides details of the six-month journey, a discussion of the manuscript, and an identification of the twenty-year-old Thomas North as its author. It also points to numerous connections between the journal and the plays of Shakespeare, extending the playwright's debt beyond North's translation of Plutarch's Lives and revealing how the journal served as a template for The Winter's Tale and Henry VIII. Both, the authors argue, were written by North during the Marian years (1554-58) and later adapted by Shakespeare. Like the authors' 2018 "A Brief Discourse of Rebellion and Rebels" by George North, this book presents original work using digital research tools, including massive databases and plagiarism software. The earlier book garnered worldwide attention, with a front-page story in The New York Times.

Dennis McCarthy is an independent scholar and author of Here Be Dragons: How the Study of Animal and Plant Distributions Revolutionized Our Views of Life and Earth, as well as other titles. June Schlueter is Charles A. Dana Professor Emerita of English at Lafayette College and author of The Album Amicorum and the London of Shakespeare's Time, as well as other titles.