Finding the Raga: An Improvisation on Indian Music (Paperback) 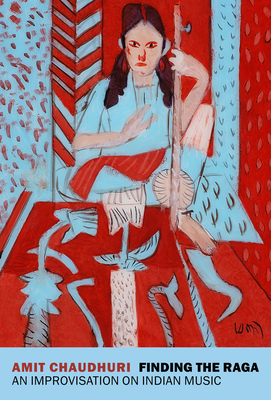 An autobiographical exploration of the role and meaning of music in our world by one of India's greatest living authors, himself a vocalist and performer.

Amit Chaudhuri, novelist, critic, and essayist, is also a musician, trained in the Indian classical vocal tradition but equally fluent as a guitarist and singer in the American folk music style, who has recorded his experimental compositions extensively and performed around the world. A turning point in his life took place when, as a lonely teenager living in a high-rise in Bombay, far from his family’s native Calcutta, he began, contrary to all his prior inclinations, to study Indian classical music. Finding the Raga chronicles that transformation and how it has continued to affect and transform not only how Chaudhuri listens to and makes music but how he listens to and thinks about the world at large. Offering a highly personal introduction to Indian music, the book is also a meditation on the differences between Indian and Western music and art-making as well as the ways they converge in a modernism that Chaudhuri reframes not as a twentieth-century Western art movement but as a fundamental mode of aesthetic response, at once immemorial and extraterritorial. Finding the Raga combines memoir, practical and cultural criticism, and philosophical reflection with the same individuality and flair that Chaudhuri demonstrates throughout a uniquely wide-ranging, challenging, and enthralling body of work.

Amit Chaudhuri is the author of seven novels, including, most recently, Friend of My Youth. Among his other published works are collections of short stories, poetry, and essays, as well as the nonfiction Calcutta and a critical study of D. H. Lawrence’s poetry. He has received the Commonwealth Writers Prize, the Betty Trask Award, the Encore Prize, the Los Angeles Times Book Prize, and the Sahitya Akademi Award, among other accolades. Chaudhuri is a Fellow of the Royal Society of Literature and holds the titles of Professor of Contemporary Literature at the University of East Anglia in England and Professor of Creative Writing at Ashoka University in India. In addition, he is a singer in the North Indian classical tradition and a composer and performer in a project that brings together the raga, blues, and jazz with a variety of other musical traditions. In 2017 he received the Sangeet Samman from the government of West Bengal for his contribution to Indian classical music.

“Supple, intricate and uncompromising, full of delicate observation and insight, Amit Chaudhuri’s Finding the Raga immerses us in the rigorous beauty and cosmology of Indian classical music. It is also a loving memoir about relationships and places, dedication and vocation.” —Geoff Dyer

“[A] compelling meditation on Indian and Western art-making.” —The New Yorker

“[E]ven if you can’t follow every nuance, Chaudhuri will suddenly offer an insight that stops you in your tracks. Listening, he writes, ‘takes us out of ourselves. We read novels, as Walter Benjamin said, to find ourselves in them; we listen to be elsewhere.’” —Alan Light, The New York Times

“India deserves a writer-musician counterpart to David Byrne, Ian Bostridge or Patti Smith. The gallingly multifaceted Chaudhuri, author of seven novels, poet, essayist and professor, has been a musician for 40 years, so Finding the Raga has been long awaited. It is part singing diary, part memoir and part music history. . . . [A] delightful and insightful book.”—Oliver Craske, The Guardian

“Amit Chaudhuri excels in writing about music and its pleasure.” —The Guardian

“Engrossing . . . A deliberately digressive foray into an enduring yet slippery style of music.” —Kirkus Reviews

“A syncretic work that draws on a great variety of Western and Indian sources and genres, combines memoir and musicology, and reads like an essay . . . [Chaudhuri’s] chronicle, like a raga, is a wonderful exposition of becoming.” —Michael Autrey, Booklist

"Although the raga has no equivalent, Chadhuri attempts to contextualize it vis-á-vis various European traditions, and there is pleasure to be found in treating this text as a kind of listening guide. . . The work is meant to be a little loose, and Chaudhuri's braggadocious avuncular vibe—as opposed to a stern of assumed authority—is diarmingly charming." —Rahel Aima, Bookforum

“[Finding the Raga] is a hybrid memoir, moving easily between personal anecdote, a performer’s explication of the art form, and social commentary. I read it in dim light, in a sort of trance, listening to singers, ragas, and genres as Chaudhuri introduced them, and a history of Hindustani music unfolded before me. Like the tradition, which values steadiness and a measure of detachment, his prose is calm, measured, and thorough. Chaudhuri pieces together elements of music with a craftsmanship that can only be the result of a lifetime of practice and inquiry. . . . Chaudhuri teaches us that human expression can be refined in a way that pretense falls away, and we lose ourselves in the weave of existence, through which we hear the world in ourselves and in each other. We come to know the self and transcend the self.” —Adeeba Shahid Talukder, The Baffler

“[A] bracing amalgam of essay and memoir . . . Finding the Raga, delightfully instructive throughout, will make you want to listen to Indian classical music anew and with ears beatifically attuned.” —Ian Thomson, The Spectator

“[Chaudhuri] leads us gently towards different ways of hearing and playing, and through them to different ways of feeling and knowing. . . . “Guns buried in flowers” is how Schumann described Chopin’s music; one could say the same of this fascinating and beautifully written book.” —Ivan Hewett, Prospect

“This marvelous book is about the transformations which go beyond the realm of music to those of life itself, for which in many ways the raga might be seen as a metaphor, something that can’t be pinned down, defined, or made static. . . . [P]erhaps we Westerners could learn a thing or two about what our own music is from following some of Chaudhuri’s directions for listening.” —John Butler, Asian Review of Books

“Chaudhuri’s book. . . tells his own story of setting aside his singer-songwriter ambitions as a teenager to devote himself to the study of Indian classical music—and becomes an inquiry into the role and meaning of music in the two cultures, and in his own life. . . As Finding the Raga reveals, [Chaudhuri] has made a lifelong exploration of a fundamental question: “What does listening involve?” —Alan Light, The New York Times

“A bracing amalgam of essay and memoir. . . . Finding the Raga, delightfully instructive throughout, will make you want to listen to Indian classical music anew and with ears beatifically attuned.” —Ian Thomson, The Spectator (UK)

“[Finding the Raga is] an account of a musical journey that is sensory and intellectual, everyday and epiphanic, a long essay made up of smaller ones. . . . its personal nature invites us to contemplate more deeply not only the content of a musical world, but also our own inwardness.” —Itu Chaudhuri, India Today