Minecraft for Makers: Minecraft in the Real World with Lego, 3D Printing, Arduino, and More! (Paperback) 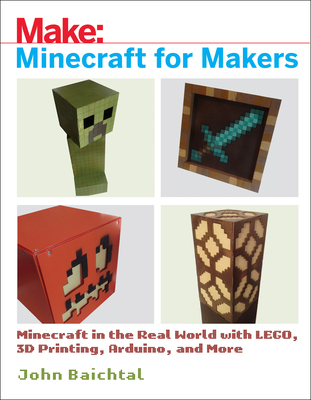 Minecraft has sold more than one hundred million copies worldwide (about 25 million of those units for the PC and Mac). According to Mojang, since the beginning of 2016 Minecraft continues to average 53,000 copies sold per day. Microsoft bought Minecraft (and Mojang) in 2014 for $2.5 billion. In 2016, Microsoft released a version of Minecraft specifically for educators called MinecraftEdu that is used by thousands of teachers around the world.

Minecraft for Makers explores the intersection of this creative and beloved electronic game with the real world. It gives readers the opportunity to take familiar objects from the game - such as blocks, jack o'lanterns, and mobs - and make real-world versions of them. Begin with simple crafting projects using wood, paint, and LEGOs. Then move up to projects that involve basic electronics with LEDs. And, finally, advance to Arduino microcontroller projects that teach programming skills and basic robotics. The skills build progressively on one another, from chapter to chapter, and the emphasis is on fun all the way

John Baichtal has written or edited over a dozen books, including the award-winning Cult of Lego (2011 No Starch Press), LEGO hacker bible Make: LEGO and Arduino Projects (2012 Maker Media) with Adam Wolf and Matthew Beckler, Robot Builder (Que 2014) and Basic Robot Building with LEGO Mindstorms NXT 2.0 (Que 2012), as well as Building Your Own Drones (forthcoming from Que). His most recent book is Maker Pro (Maker Media 2014), a collection of essays and interviews describing life as a professional maker. John lives in Minneapolis with his wife and three children.