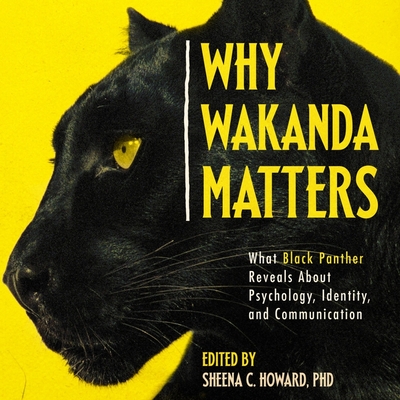 In 2018, the Marvel Cinematic Universe finally delivered on something fans had long been waiting for: a feature film with a solo Black superhero.

Black Panther introduced viewers to the stunning world of Wakanda, a fictional African country with incredible technological advancements, and to T'Challa, a young man stepping into his role as king and taking up the mantle of the Black Panther title from his late father.

The unforgettable story, coupled with the film's mega-success, has undoubtedly shaped the future of superhero cinema, in addition to genuinely changing viewers' lives. Why Wakanda Matters gives this iconic film the in-depth analysis it deserves under the lens of the latest psychological concepts-as well as delving into the lasting cultural impact of this unforgettable story.

Edited by Sheena C. Howard, an award-winning author, filmmaker, and scholar, Why Wakanda Matters: What Black Panther Reveals About Psychology, Identity, and Communication features a collection of essays from leading experts in a variety of fields who offer insightful perspectives on topics such as:

Cognitive dissonance: The important messages within T'Challa's nuanced identity and eventual shift from nationalism to globalism.Intergenerational trauma and resistance: How N'Jadaka (aka Erik/Killmonger) identifies with the trauma that his ancestors have suffered.Social identity: How Nakia, Shuri, Okoye, and Ramonda--all empowered, intelligent, and assertive women of color--can make a lasting impression on women and girls.Collective identity: How Black Panther has created a shared fantasy for Black audience members--and why this is groundbreaking.Cultural and racial identity: What we can learn from Black Panther's portrayal of a culture virtually untouched by white supremacy.

Fans of the movie and those interested in deeper discussions about the film will revel in this thought-provoking examination of all aspects of Black Panther and the power of psychology.