Nurturing the Love of Music: Robert Freeman and the Eastman School of Music (Meliora Press #31) (Paperback) 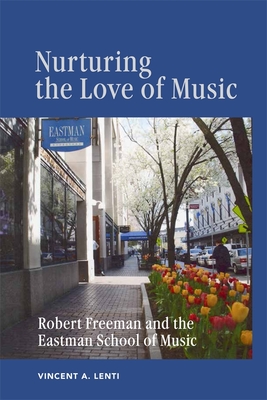 This is book number 31 in the Meliora Press series.

Nurturing the Love of Music is the third volume of Vincent Lenti's history of the Eastman School of Music, being preceded by For the Enrichment of Community Life: George Eastman and the Founding of the Eastman School of Music (2004) and Serving a Great and Noble Art: Howard Hanson and the Eastman School of Music (2009). This most recent addition to the written history of the school is mainly concerned with the period of time when Robert Freeman served as the school's fourth director (that is, dean). Freeman was recruited to lead the Eastman School in the fall of 1972 and officially assumed responsibilities as director on July 1, 1973. He served as director until his resignation in 1996. His was the second longest tenure in the school's history, only being surpassed by that of Howard Hanson. That tenure allowed him to exercise great influence over faculty recruitment, program development, and fundraising, as well as presiding over the most significant expansion of the school's physical presence in downtown Rochester since the original construction of 1921 and 1922.
The publication of Nurturing the Love of Music coincides with the celebration of the Eastman School's one-hundredth anniversary. Because of that anniversary celebration, the book includes as its final chapter a brief summary of the post-Freeman years, a story that will no doubt be told in greater detail sometime in the future.