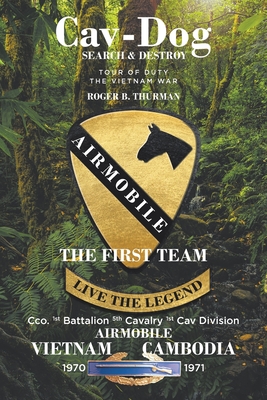 True story of the firsthand account of my tour of duty. From March 7, 1970, to January 30, 1971, with the First Cavalry, a rifleman with Charlie Company, First Battalion, Fifth Cavalry. Beginning with the pacification program to the May-and-June invasion into Cambodia, combat assaults and search-and-destroy missions into enemy sanctuaries. Next, my unit followed along the Ho Chi Mihn trail in search of COSVN headquarters for the NVA Army. This involved capturing enemy caches. One in particular, nick-named The City, capturing a major rice cache while being pinned down for a week. We operated out of two dozen firebases during my tour of duty with Charlie Company, and continued search-and-destroy operations in several provinces in III Corps Vietnam, including Tay Ninh. I was dealing with booby traps, ambushes, snakes and crocodiles. The casualties continue to mount up as Charlie Company continues search and destroy operations.

Members of the Nixon Task Force to Southeast Asia report that the Cambodian invasion is the "most important single military achievement of this whole unfortunate war."