The Way Life Should Be?: The Globalists' Demographic War on America with Maine as a Microcosm (Paperback) 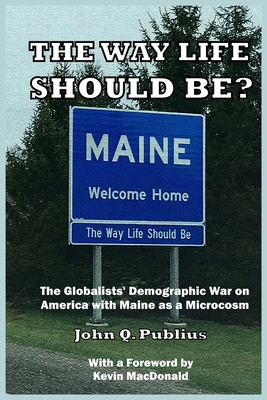 A complete overview of the exact mechanisms whereby the internationalist lobby is controlling, directing, and actively organizing mass Third World immigration with the explicitly-stated aim of destroying America--viewed with special emphasis through events in the state of Maine.

Analyzing all aspects of society--the media, economics, environment and social and political structures--this work shows in painstakingly-documented and fully-referenced detail exactly who is directing America's current political process and decline.

It shows that neo-liberal capitalists and crazed ideologues are facilitating mass migration into America, and actively seeking to transform the country as we know it in their image, in the process destroying the American nation. This cosmopolitan cabal uses their wealth and influence to see the realization of their agenda on every front, to advance their own interests and continue to enrich themselves regardless of the cost to any other group; this globalist "elite" through stealth and deception is responsible for the wide-spread push of the deeply harmful ideologies and policies we find ourselves facing today.

At the same time, its lobby engages in blatant double standards and suppresses any criticism of this "hypocrisy of the highest order" through a barrage of "hate crimes" and "hate speech" legislation, and "tolerance" factories which seek to outlaw any discussion or mention of their power and influence.

Highly recommended for anyone seeking to understand exactly what is happening in America--and indeed the entire Western world.