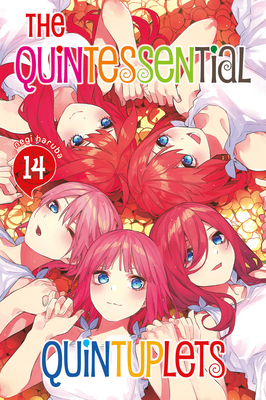 This is book number 14 in the The Quintessential Quintuplets series.

A high school romantic comedy with five times the cute girls! A high school boy must work part-time to help five sisters study so they can graduate, but the only thing these quintuplets have in common is that they all hate studying!

ALL YOU NEED IS LOVE, RIGHT?

Futaro finally made his choice, and Yotsuba has always loved Futaro dearly, but somehow that doesn’t equal a happy couple. The fallout from Futaro’s choice is massive as Yotsuba attempts to reconcile her feelings for Futaro with her guilt towards her sisters. Hell hath no fury like a woman scorned, and Yotsuba must face that fury four-fold. In this series finale, a happily ever after awaits Yotsuba and Futaro, but only if the rest of the quintuplets allow it!

Negi Haruba debuted in 2013 with the story "Coward's Crossword" in Kodansha's Magazine Special. Haruba's first series was Purgatory Karma in 2014, followed in 2017 by Quintessetial Quintuplets, which is the artist's first manga to be published in English.